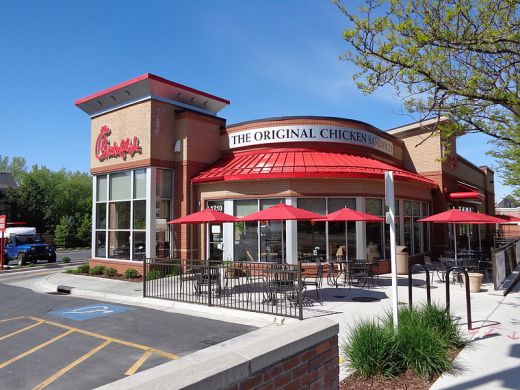 I don’t follow many blogs, but one I enjoy reading is Frugal Girl. Kristen, the Frugal Girl, posts several times a week on frugality, gratitude, and grocery spending/meal planning among other things. I especially enjoy reading the comments, which – like Kristen, herself – are almost always kind, generous, and gracious.

In her latest grocery/meal post, however, Kristen mentioned that one reader had taken her to task for mentioning Chick Fil A by name in her posts, thereby giving them free advertising. Kristen said that she found the complaint “funny” because from what she had seen, Chick Fil A didn’t need any advertising from her.

That should have been the end of it, but several commenters made it a point to mention that they didn’t like Chick Fil A and/or wouldn’t eat there because of the commenters’ perception of Chick Fil A’s (actually the owners’) problematic politics and “how intolerant they are of LGBTQ.” Someone who lives outside the US even expressed her disgust and linked to an article about Chick Fil A closing in the UK.

Several things struck me about these commenters’ posts.

First, they seem not to know or care that though the owners of Chick Fil A (like the owners/shareholders of most other companies these days) support causes and organizations that they believe in but that the commenters may not support, they serve everyone with courtesy and respect. They do not discriminate against anyone based on their LGBTQ status or any other status.

Second, though she doesn’t flaunt it, Kristen is a Christian and may very well support (or not) the causes and organizations that the owners of Chick Fil A support. Yet in her blog posts, Kristen is never judgmental, and she is unfailingly kind and courteous to all commenters. It seems not to have occurred to these posters – who all seem to like the blog and Kristen – that their comments might possibly be treading on her beliefs.

It also doesn’t seem to have occurred to them – though Kristen is a prime example – that it’s entirely possible to disagree with someone’s political or religious/cultural beliefs or lifestyle choices without hating the person (or organization) that holds to those beliefs or choices.

In these very troubled times, it would be good if more people would understand that it is entirely possible for people of good will to disagree profoundly about the issues of the day and still treat those who disagree with them with courtesy and respect. Kristen does that. Chick Fil A does that. If more of the rest of us could do that, perhaps our cities wouldn’t be in flames.

Linda Whitlock has been a college English instructor, a freelance writer, an online writing coach, and an opinion columnist for The Roanoke Times. Her work has appeared in a number of publications, including The War Cry, HomeLife, Mature Living, Spirit-Led Writer, and PrimeLiving. Her passion is writing about the intersection of politics, culture, and worldview, particularly the Christian worldview.
View all posts by LAW →
This entry was posted in Uncategorized. Bookmark the permalink.